THE PLACE OF EARTH IN THE UNIVERSE
a fundamental quest…

Quite a long… and large… and slow… and deep look into the sky…
—
The view of the vast cosmos… The wide perception of the celestial dome above Earth… The accurate night scrutiny of the immense number of small bright lights…
—
The distinction between fixed luminous points, the stars (designation derived from a Proto-Indo-European root and the name of the Akkadian goddess «Ishtar»), and moving lights, the planets (designation derived from the Greek πλάνητες ἀστέρες, wandering stars)…
—

The clever observation of both large luminaries of nearby space – the Sun by day, the Moon by night – and the study of their evolving movements and mutual changing relations…

The accurate and systematic mapping of stars and planets on the sky, aiming to learn from their reciprocal (fixed or changing) positions, has been an obvious – and quite a significative – part of our ancestors search for the main laws ruling their environment and lives.
—

… and from Egyptian times

Following former Sumerian, Assyrian and Babylonian traditions, people from the European Classic (Greek-Roman) Antiquity filled their visible sky (north hemisphere) with a large ensemble of mythological beings suggested by the shapes formed by agglutination of apparently linked stars, into what we still call constellations (groups of stars)…

—
Supposedly, those celestial closest entities together with twelve main constellations of the far sky, the Zodiac Signs, the Water Bearer, the Fish, the Ram, the Bull, the Twins, the Crab, the Lion, the Virgin, the Scales, the Scorpion, the Archer, the Goat – in Latin: Aquarius, Pisces, Aries, Taurus, Gemini, Cancer, Leo, Virgo, Libra, Scorpio, Sagittarius, Capricornus –. occupy the sky, both to keep the Universe in a harmonic balance and to closely rule human’s lives, then allowing future predictions Horoscopes. 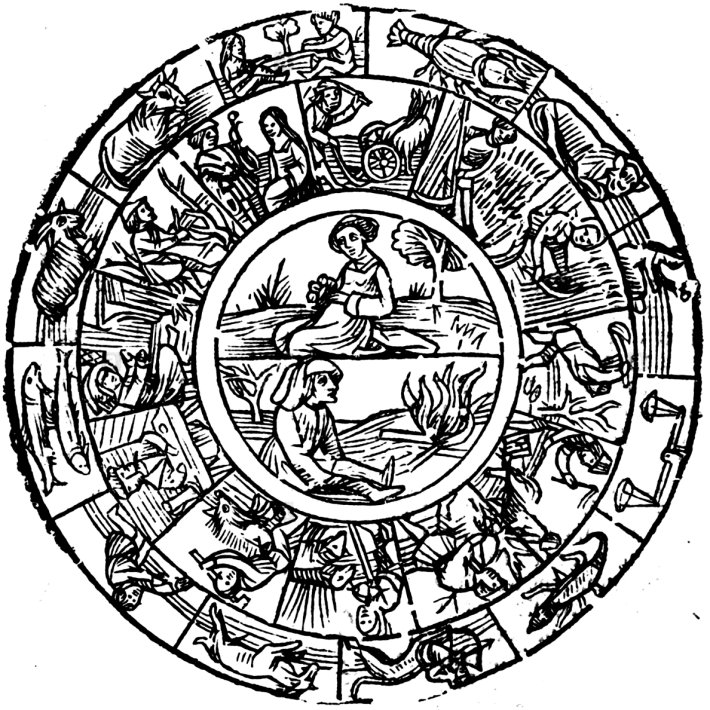 Conditioned by an earliest (natural) anthropocentric perspective of our planet Earth and its close Universe surroundings – both quite scarcely perceived then – the most plausible model for the comprehension of the solar system was the Geocentrism (Earth centrism).

However, a heliocentric view – a central sun, revolving celestial objects and a rotating Earth – can first be traced in the Orphic Hymns (), and …

Anaximander (≈610-546 BC). He thought of the Earth as a drum-like cylinder, rotating separately from heaven, and revolving around the centre of the Universe. It is also important that Anaximander assumed that even be the Sun might lie at the centre

—
≈ 350 BC
Aristotle, a pupil of Plato, becomes the tutor of Alexander the Great. Aristotle’s views of the world shape science for centuries. His influence lasts until the enlightenment. In his book «On the Heavens» (part 14), Aristotle asserts that: “From these considerations then it is clear that the earth does not move and does not lie elsewhere than at the centre”.
≈ 250 BC
Aristarchus estimates the size of the sun to be much larger than the size of the earth. Based on this observation he then presents the heliocentric model.
≈ 250 BC
Archimedes In The Sand-Reckoner, estimates the number of sand corns in the universe using the heliocentric model of Aristarchus.
—

—
≈ 150 AD
Ptolemy, in his book «Almagest», introduces so called epicycles to explain planetary motions, based on the assumption that the earth is at the centre and does not move. Almagest is considered to be one of the most influential scientific works in history.
—

—
1543
Nicholaus Copernicus, just before his death, publishes the book «De Revolutionibus Orbium Coelestium» [On the Revolutions of the Heavenly Spheres] in which he places the sun rather than the earth at the centre of the universe. This book is the beginning of the Copernican Revolution.
1572
Tycho Brahe observes a star being born and publishes his observation in «De nova stella». Brahe’s observation refutes the commonly held view at the time, a view which dates back to Aristotle, that the stars are fix and never changing at the outskirts of the universe. Since Brahe couldn’t observe a stellar parallax, he concluded that the earth did not move. He proposed a model where the planets move around the sun, and the sun moves around the earth. (It was later shown that it wasn’t a star being born Brahe had observed, but the supernova SN 1572, i.e. a star exploding).
1609
Johannes Kepler, using the observational data collected by Tycho Brahe, introduces his first two laws of planetary motion in «Astronomia nova». The first law: the planets move in elliptical orbits with the sun at one focus.
1616
On 24 February 1616 a team of eleven consultants for the Roman Inquisition condemns the Copernican System, stating that the heliocentric system is “foolish and absurd in philosophy” and “formally heretical”.
—

—
1633
Galileo Galilei stands trial on suspicion of heresy “for holding as true the false doctrine taught by some that the sun is the centre of the world”. At the trial he is found guilty and sentenced to formal imprisonment. Galileo spends the rest of his life under house arrest.
1687
Isaac Newton publishes «Philosophiae Naturalis Principia Mathematica» («Principia)». In Principia, Newton explains Kepler’s laws of planetary motion in terms of universal gravitation. Newton doesn’t consider the sun to be at rest, instead he uses the center of gravity of the solar system.
1838
Friedrich Bessel is the first to accurately measure a stellar parallax. In 1838 he announces that the star 61 Cygni has a parallax of 0.314 arcseconds.
1992
Roman Catholic ChurchPope John Paul II closes a 13-year investigation into the church’s condemnation of Galileo in 1633 by declaring that Galileo was right: “Thanks to his intuition as a brilliant physicist and by relying on different arguments, Galileo, who practically invented the experimental method, understood why only the sun could function as the centre of the world, as it was then known, that is to say, as a planetary system. The error of the theologians of the time, when they maintained the centrality of the earth, was to think that our understanding of the physical world’s structure was, in some way, imposed by the literal sense of Sacred Scripture”.
—

UNDER THE «LAW OF PARSIMONY»…

The solution of the dispute between Geocentrist and Heliocentrist theories eloquently illustrates «Ockham’s razor» principle (or «law of parsimony»), the problem-solving rule that states that most simple solution tends to be the correct ones…